When it comes to innovation, change is the only constant. The capital markets space as a whole is making progress in terms of digital transformation, but there is still a long road ahead – our data indicates that approximately 80% of the tools used by the industry are legacy applications. In order to ward off displacement, banks and buy side firms need a truly modern technology strategy that allows for constant evolution of their financial desktop.

Achieving this often means a re-evaluation of how software is built, packaged and distributed. Some of these outmoded processes have long been considered obsolete in other industries, but large financial institutions have been slower to adapt for a variety of reasons, which range from the sheer enormity of the task to a generally (and in some ways rightfully) risk-averse corporate culture. However, there are market participants that have made significant strides away from legacy and toward a more efficient future, and their actions represent nothing less than a revolution.

There are two key areas where this progress is being made. The first is modernization – the process of migrating legacy applications to the web and making them look and function more like those on your smartphone for a better user experience overall. The other is democratization – it’s easier than ever for anyone (not just incumbents) to deploy an app to clients, and end users can better integrate this content into their workflows.
Today, we’ll tackle the first area: modernization. Software developers have a staggering number of tools at their disposal, and industry firms are leveraging these to build robust systems that offer powerful functionality while maintaining a seamless user experience.

Reaping the benefits of web migration

At the heart of these efforts is web migration. The move to web, and replacement of technologies such as Java and .NET, is a multi-industry trend. By leveraging the latest web technologies and open source code, developers can build modern, cross-platform apps that give users a rich experience while being deployed and updated from the cloud. Development is five times faster and the talent pool is wide, so the total cost of ownership is significantly lower. To reap the benefits, however, firms with legacy apps need a good migration strategy.

Rather than having to do a wholesale rewrite of legacy apps in a “big bang”, plan for a phased web migration approach. Legacy apps can be broken into smaller chunks and replaced over time in iterative cycles. You can also bring in an app that incorporates both legacy and web technologies, and includes an interoperability layer and native language adapters to ensure a seamless integration experience for the end users — using both data integration and visual integration between legacy and web components.
Whether it’s re-platforming a legacy app onto the web or building a new tool from the ground up, this can be a daunting task, but the rewards are enormous.

Interoperability is another key benefit of modernization. Developers can build their apps to include bilateral communication with a host of other tools, regardless of where they originated. This helps the financial desktop to behave more like the consumer technology we’ve become accustomed to in our everyday lives. For example, when you book a dinner reservation on your smartphone, you might be prompted to add the date to your calendar, book transportation to the restaurant or invite friends via email or text. In each of these cases, two apps are sharing information with each other, enabling what would otherwise be a tedious, multi-step process to be completed with just a few taps of the thumb.

It’s the same idea on the financial desktop. With greater interoperability, a data feed might automatically populate information based on a triggering event in an order book, or a virtual assistant might prompt the user to take an action based on market conditions. In both cases, end users get quick access to powerful insights while sacrificing none of the workflow efficiencies that modern desktops make possible. This simple app-to-app interoperability is made even easier when using a FDC3 industry standard that enables internal and 3rd party apps to plug and play.

Bottom line; that’s where the benefits of modernization count

Of course, everyone can agree that this sounds nice in theory. The reality is that capital markets firms have incredibly complex decision-making processes, and they may be slow to modernize for any number of reasons ranging from a lack of understanding, to an aversion to disrupting systems that are functioning adequately to very real compliance concerns. The old way of doing things is ingrained to the point that some executives may wonder why we speak about digital transformation with so much urgency.

Luckily, the many benefits of modernization are there to help us convince leadership to get on board. Out of them all, perhaps cost is the most compelling. Throughout our many years’ experience in financial services, we’ve found that building with a legacy tech stack is five to six times as expensive as migrating to web, primarily due to the hours of extra work required and the cost of labor. This may feel like peanuts in the short term, especially for larger companies, but that money adds up over the course of months and years, and as innovation accelerates, the difference will become even starker. Bottom line: when your competitors can build faster and at a fraction of the cost, migration is a business risk, plain and simple.

Firms should also consider how modernizing will boost their ability to recruit tech talent. Today’s graduates are coming out of school armed with a tremendous amount of knowledge of the latest systems and languages, though they may not be well-versed in certain legacy systems. Others simply aren’t interested in them. Tech departments that continue to lean on legacy are left to hire from an ever-shrinking pool of legacy technologists, who are quite expensive and quickly becoming scarcer.

Revolution doesn’t happen overnight. When it comes to the financial desktop, modernization is a complex process that requires long hours and tough decisions. Ultimately, though, it needs to be reframed as a necessary part of any firm’s evolution – not a nice-to-have differentiator, but a key component of future success. Widespread adoption of digital transformation means a future of minimal displacement and efficient workflows, and that’s a goal that we should all strive for.

By enabling web apps to run outside the browser with desktop experience and offering a simple app-to-app interoperability with an FDC3 industry standard, OpenFin solves many of the longstanding barriers to modernization that have long plagued banks, investment managers, exchanges and tech vendors. With immediate updates and remote debugging, your clients will never need to worry about whether they can accommodate the latest version of software, and seamless deployment to thousands of desktops at once is sure to boost their adoption timelines dramatically. For an industry that prides itself on speed, these are powerful features that lets your technology staff keep pace with both the markets and the diverse needs of your clients.

Learn more about how we’ve helped our clients evolve, get in touch. 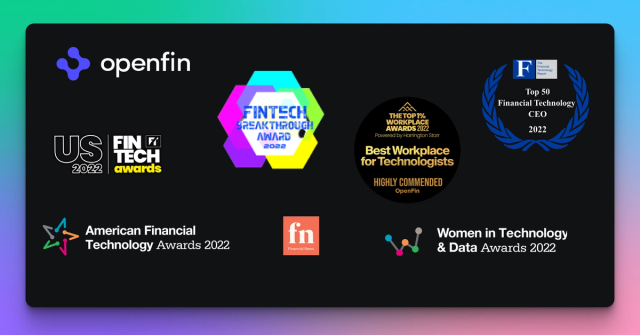 Looking back on 2022, our technology has fundamentally revolutionized the desktop, proven true in the array of industry awards OpenFin has been honored to receive.

The Future of FX: How OpenFin Workspace Combats the Complexities of Rapid Digital Transformation

To prepare for and thrive in any set of market conditions, these tools and technologies cannot exist in a vacuum in which they are easy enough to use on their own but unable to seamlessly share information.